Sub-Zero is a gold, 3-star base Arcane class hero. A cryomancer capable of making endless copies of his opponents, he is a slippery and enduring combatant and a fearsome giant-killer when used well.

His shards can be obtained through Challenges or the Mortal Kombat Chest, a rotating chest in the store, which has a higher chance of him or Raiden.

His gear is available from his Challenge (level 1) or Raid completion rewards (level depends on difficulty).

Grandmaster of the Lin Kuei, Sub-Zero can create a clone of his opponent to fight for him in battle. Also, using an ice ball, he may freeze his opponent, stopping the victim's power generation and allowing for a follow-up attack from himself or one of his teammates.

Sub-Zero is incredibly powerful when facing opponents with much higher stats, particularly those with weak passives. His ice clone essentially steals most their stats for his use. In fact, his worst enemy is often the countdown timer, especially against high defence teams; however, it seems as long as his team does more damage, he can still win in Arena matches when the time runs out.

Normally, you're invulnerable and the enemy can't start a special while you're using a special. However, if Sub-Zero is far away from his opponent, Klone Toss would take a long time to reach his opponent and the latter would be able to use ranged basic attacks, or if far enough, a ranged special or a Supermove before it could hit. The basic attack can KO Sub-Zero, preventing a clone from being created (although they would still be briefly frozen). A special or supermove (or in rare occasions, a well-timed tag) would negate Klone Toss entirely.

When the countdown timer runs out in Arena, if you win with a clone, the game would automatically tag in Sub-Zero to perform the winning animation. This led to a misconception that you must tag out the clone at the last moment to win, which is not the case.

Since Doctor Fate/Power Girl is practically mandatory for him anyway, a different strategy is to chain his Ice Balls; by freezing them, waiting till they are about to be unfrozen before hitting them with basic attacks and freezing them again, you can lock down enemies almost indefinitely (especially with high level Ice Ball that increases freeze duration, e.g. by level 41 it is doubled, and in later parts of the match with faster power generation). Ice Ball used on a target that isn't being hit by basic attacks or already frozen can be blocked or even jumped over, however.

While clones is generally a much better strategy against stronger opponents, this could be useful in some situations, for example, against an enemy Sub-Zero clone, which cannot be cloned. If you clone an enemy Sub-Zero, the clone can use Klone Toss, but cannot create another clone.

Even when using the clone strategy solely (which has a hidden advantage of not needing expensive upgrades, as the vast majority of the damage dealt would be by the clone, not the toss), having Ice Ball at least 1 level higher can protect Klone Toss from being disabled by Silver Banshee. Note that upgrading Klone Toss has no effect other than increasing its low inherent damage, so it is not very useful.

Both Ice Ball and Klone Toss (the special itself) cannot deal a KO blow.

When relying on the clone strategy, any offensive stat on Sub-Zero himself is basically useless. Instead, defence can be somewhat helpful for Sub-Zero to survive if he is caught without a clone. 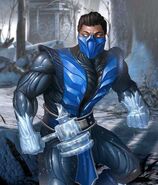 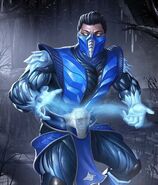