Multiverse White Canary is a 3-star base Agility hero, able to empower her Multiverse teammates both in abilities and gear. Her moveset is unique to Black Canary's, however, she has the same Supermove as her.

Her shards can be obtained through rank rewards in Arena. She could also be obtained directly from the Shared Reality Chest with a 2% chance.

All teammates gain an increase to the base effect of their Equipment gear (5th gear slot). Upon use, Multiverse teammates' Special 1 has a chance to cost no power.

From close distance, Sara quickly spins her staff, knocking away her opponent.

A former member of the League of Assassins, White Canary unleashes a barrage of baton strikes, pushing back her opponent.

Sara tosses out a sonic device that can temporarily disable the opposing team's Abilities.

White Canary launches her opponent into a violent canary cry.

However, it also gives a chance for Multiverse special 1 to cost no power, which is a fairly strong effect, especially when utilized with Multiverse Armored Supergirl's devastating s1 (and also if you don't have Multiverse Flash, who can reduce power costs, on the team).

When using Sonic Device, White Canary first kicks her opponent (10% of total damage) before throwing out a horizontal projectile (90%, seemingly unlimited range). However, it can be mutually destroyed by certain projectiles, including basic ranged attacks such as that from Sub-Zero. If it KO's an opponent, the next opponent would have their specials disabled. 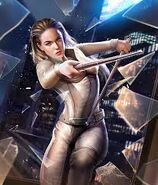 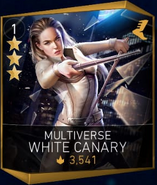 Her card with stats.

A slightly modified portrait of her from facebook during the Easter spring sale 2019.
Community content is available under CC-BY-SA unless otherwise noted.
Advertisement