Injustice 2 Mobile Wiki
Register
Don't have an account?
Sign In
Advertisement
in: The Joker, Agility class, Heroes,
and 2 more

Last Laugh The Joker is a 3-star base, Gold, Agility class Hero. His shards can be earned through Premium Hero Chests and the League of Anarchy Chest.

Alongside Entangling Poison Ivy and Heartbreaker Harley Quinn, he is a member of the League of Anarchy and gains several buffs from being teamed with them.

The Joker and his League of Anarchy teammates deal increased damage over time. He gains a damage boost when a hero on either team is defeated. He may also stun opponents as they tag in.

Caught You Off Guard[]

Killing Joker adds a stacking buff to his damage with every KO in the match. Normally, this stacks up to 4 times (with only Joker and 1 opponent standing).

Caught You Off Guard is a very debilitating effect, as Joker gets a chance to stun any enemy who tags in, which includes summoned units (e.g. Sub-Zero clones), and even those forced to tag in when Joker KOes their teammate. The stun commences after the target performs its first tag attack hit.

Immobilizer's last hit can force his target to tag out (a "FORCE OUT" text pops up when this happens), which can also stun the next opponent due to Caught You Off Guard. 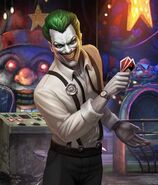 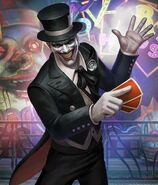 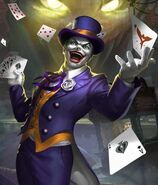