Darkseid is a Legendary 4-star Arcane class hero, the first of the kind, and the second Legendary after Arkham Knight Batman.

Originally, while a decent combatant, Darkseid's capabilities fall short from spectacular, despite his extremely high base stats and given the extreme gem cost to obtain him. However, after Update 3.2, Darkseid has been refactored and buffed. 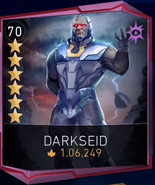 Darkseid's portrait without a full set of gear. 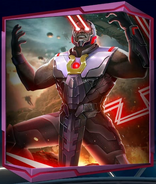 Darkseid's portrait with a full set of level 60+ gear.

Darkseid's official mobile wallpaper.
Add a photo to this gallery
Retrieved from "https://injustice-2-mobile.fandom.com/wiki/Darkseid?oldid=7588"
Community content is available under CC-BY-SA unless otherwise noted.