CBM
Classic Batman is a 2-Star base, Gold, Agility class hero. He is exclusively available through Arena invasion events. His passive ability boosts all versions of Batman even when not on the team.

Batman supports other Batman heroes by boosting their attack and health while increasing XP gained in Battle and when using XP capsules. Batman may also gain power when a Blinded opponent misses.

Knight of the Eclipse[] 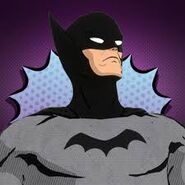 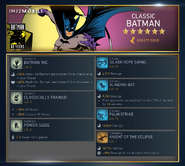