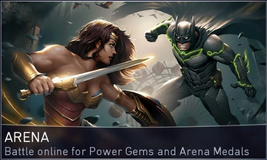 Arena is a game mode in which players fight against AI-controlled teams created by other players. Fights in the Arena contribute to your seasonal Battle Rating, the score that determines your rewards once the season is complete. This game mode is unlocked once the player reaches Level 3.

One of the most important things to know about the Arena is that there are several, functionally separate Arenas. Older accounts are put in higher, more competitive Arenas, though all Arenas feature the same rewards. DC Game Support has stated the Arenas were designed to filter by account age so you would be battling other players who "began playing the game around the same time as you and have had a similar opportunity to progress their collections & characters."

This is heavily disadvantageous for players who registered at the beginning of the game and have since taken long hiatuses. Some players choose to make new accounts to circumvent their Arena placement.

The different Arenas are typically referred to as Arena A, B, C, D, etc. Newer arenas are added periodically as the older ones reach capacity. At one point, the oldest Arena (A) was split into A1, A2 and A3.

Entering Arena battles requires a unique resource called Pips. Each of your characters will have a max of 5 Pips at a time & they will refresh every day at noon (GMT) if depleted. Pips do not stack for future seasons.

Upon tapping "Find Opponents", the player will be presented with 5 possible matches to choose from. They are always arranged with the most challenging team on top & the easiest team to beat at the bottom. The easiest match is always at or around your threat level, while the hardest will typically have a threat rating around ~2.5 times as high. The higher the threat level of your opposing team, the higher your Battle Rating will be.

You may receive unusually strong teams as the top threat option. As a team with 330k threat, most top enemy teams are around 800k - 900k threat, but occasionally you will get an enemy team at the 1.1M - 1.6M threat range.

The "Refresh Opponents" option allows you to re-roll for an entirely different set of 5 matches (with a 10 seconds cooldown between refreshes). By changing a team and not refreshing, it is possible to fight the same opponents with a different team. This can be useful if you are very confident about your team (i.e: you could use a high threat team to get high threat enemies, then change to a lower threat team to fight them). Heroes able to turn the enemies' strength to their benefit may do this successfully, such as Special Block users and Sub-Zero.

There are 2 Arena seasons each week.

There is a one hour cool down between the end of a season and the start of the next season to distribute the end of season rewards. A new season starting will refresh all heroes' Pips, which otherwise only happens at noon GMT.

Arena Invasion is a special mechanic in which a hero has a chance to "invade" a battle, randomly replacing one of the enemy heroes. The invading hero tends to have significantly lower stats, and is always first to appear in battle. If you win that battle, you gain 2-3 of their shards and a piece of their gear. Invasion rewards can be obtained 3 times a day, resetting like Pips.

Invasion events are not always active. Only one can be active at a time. Arena Invasion heroes include Justice League Cyborg, Batman Ninja Harley Quinn, Classic Superman, and Classic Batman. Generally, they only invade the Arena when they are first released, and they are rarely available again as such afterward.

Players gain daily and seasonal rewards based on how much Battle Rating they have accumulated compared to other players. Untouchable and up requires the player to be top 200 or better.