1.4.0 is the version of the game following the first update to the initial version of Injustice 2 Mobile. It was released on May 26, 2017.

It changed the following:

The following bugs were fixed: 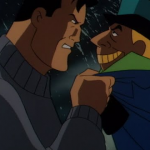